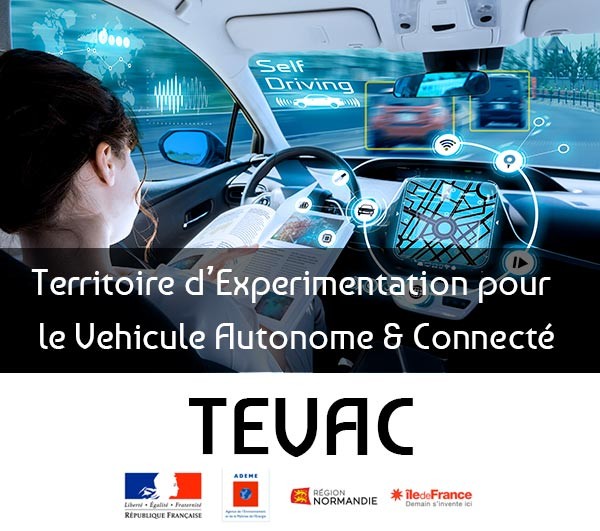 TEVAC - Territory for Experimenting Vehicles Autonomous and Connected - is an ambitious project which objective was to bring together key succes factors to make the Seine Valley an experimentation environment for autonomous and connected vehicles, applied to land and maritime domain for passenger and freight transport applications. This project was launched in 2017 as part of the Interregional State-Regions Seine Valley contract in France. It followed a call for "Environmental transition and economic valorization" issued by the Île-de-France and Normandy regions in partnership with the French Environment & Energy Management Agency for Climate change – ADEME.

Create the conditions of success to make the Seine Valley a territory of experimentation for autonomous and connected vehicles.

This first stage of the project laid the foundations for the second one, which objective was to carry out an in-depth analysis, by identifying successful use cases, the precise diagnosis of the technological components to be mustered, the identification of the territories where to carry out trial, needs and possible fleets of vehicles or communities of beta testers. It focused on qualifying and quantifying the economic, human (stakeholder competences) and environmental externalities of the autonomous vehicle.

Development of a corridor for Field Operational Tests, launch of two autonomous systems trials projects and greater awareness for a stronger territorial responsibility
This approach highlighted the responsibility of territories in the implementation of mobility systems. The project shifted from an industrial objective - the autonomous electric vehicle - towards a political and attractiveness project which invites to rethink mobility within territories in the perspective where 80% of the world population will live in urban and suburban areas by 2050. The technological barriers but also human (acceptability and adoption of emerging systems), legal or insurance topics remain to be lifted.

Cookies allow us to provide you with our services more easily. With the use of our services, you authorize us to use cookies.
Ok
Learn more